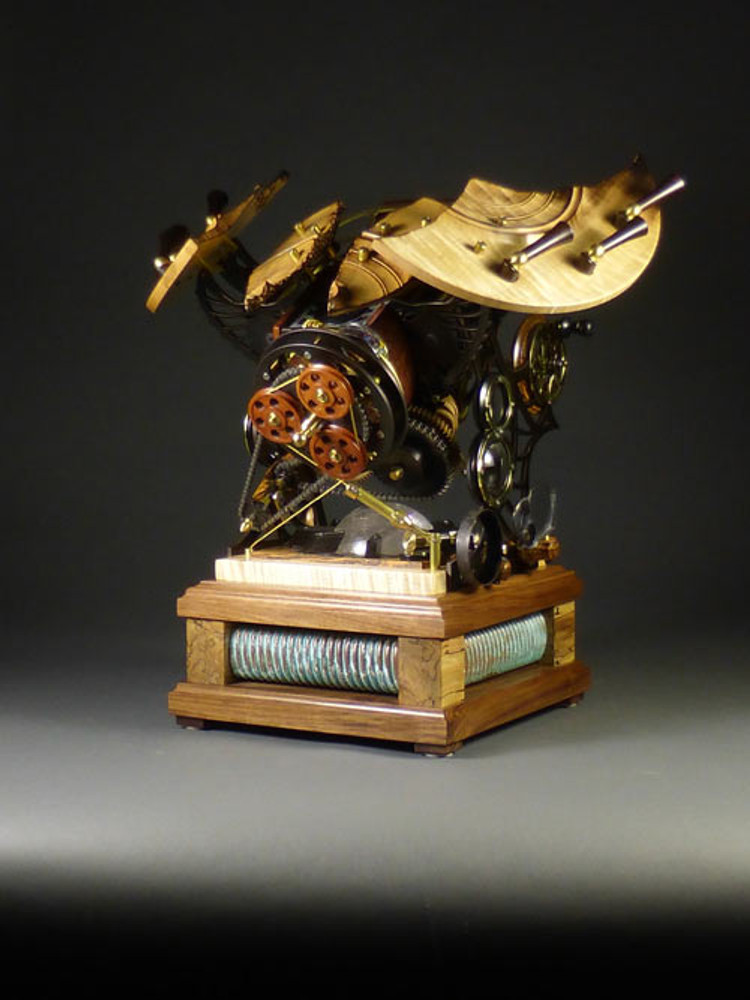 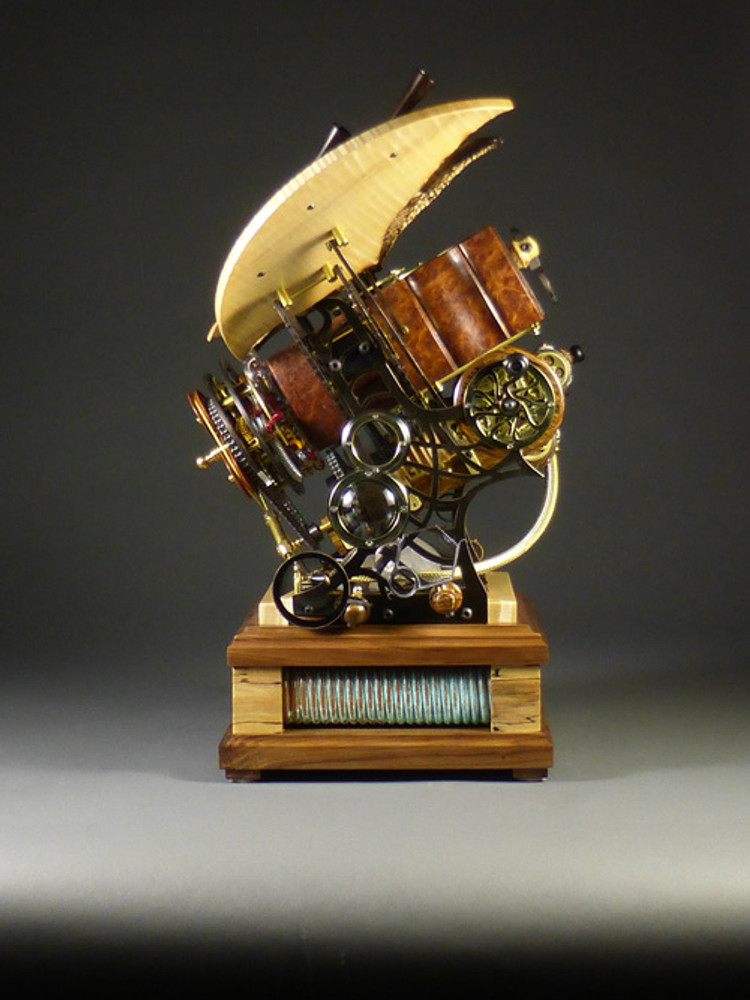 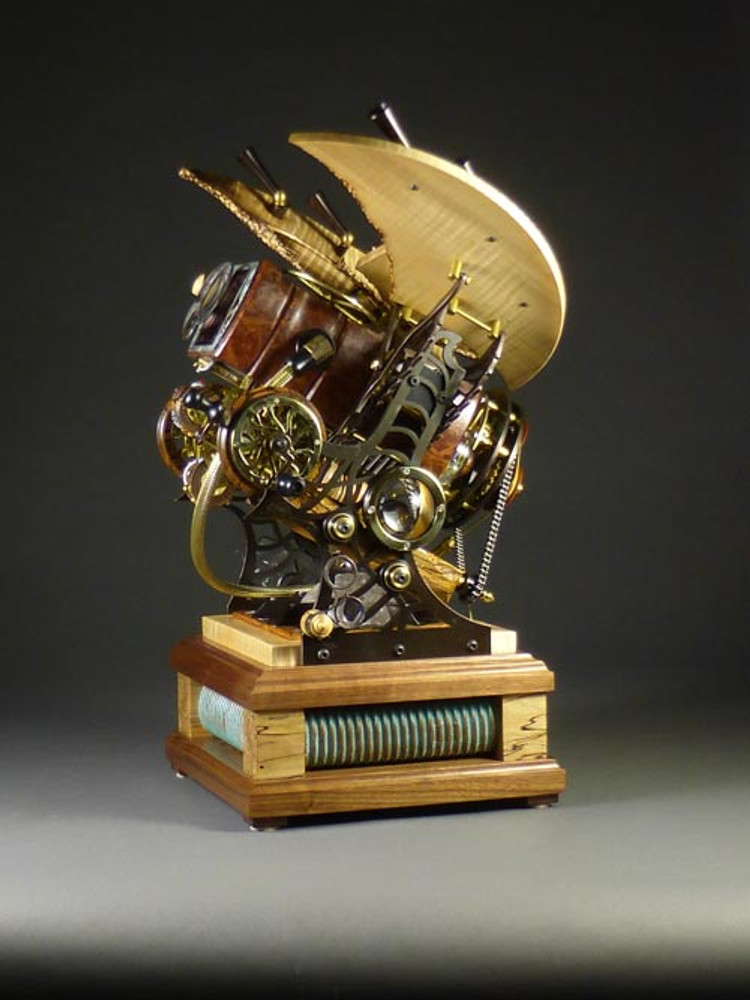 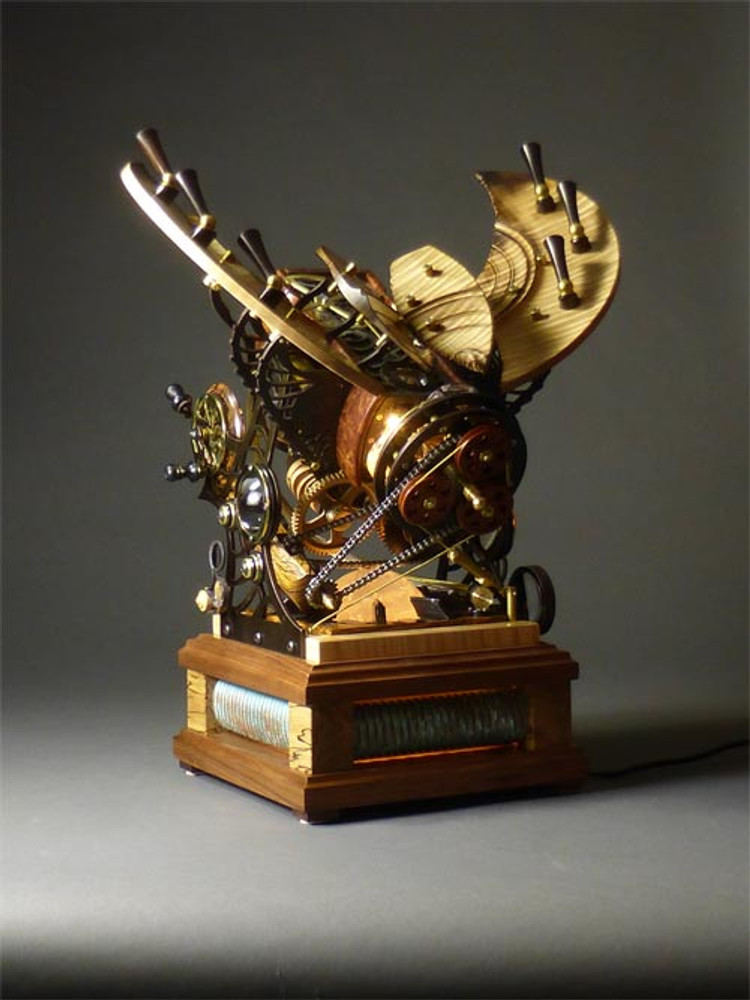 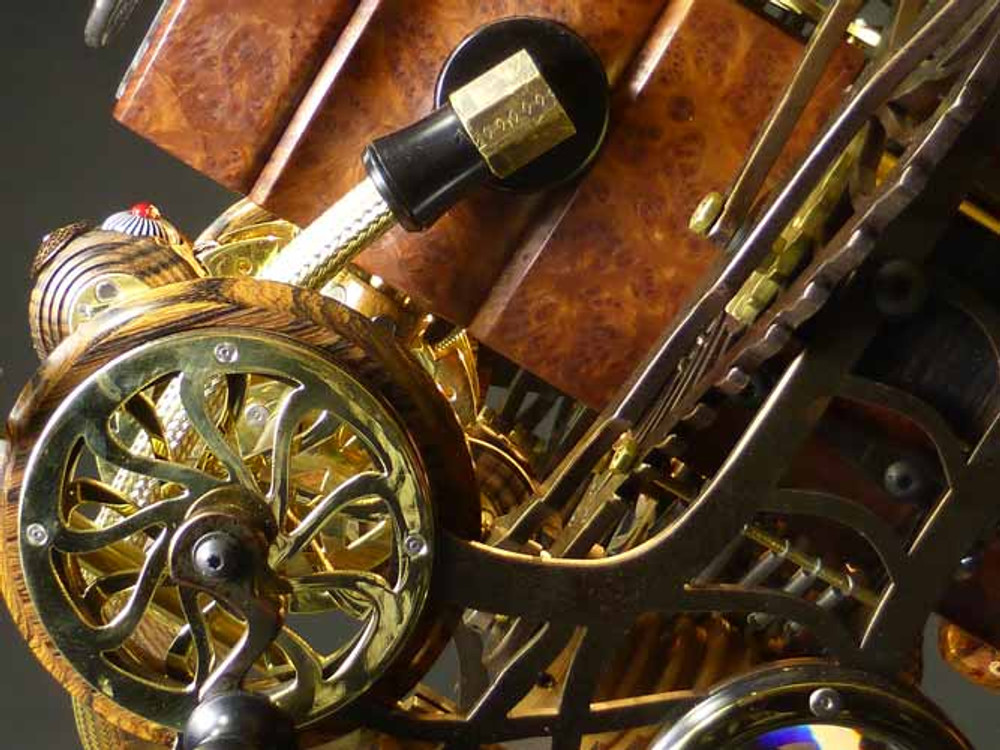 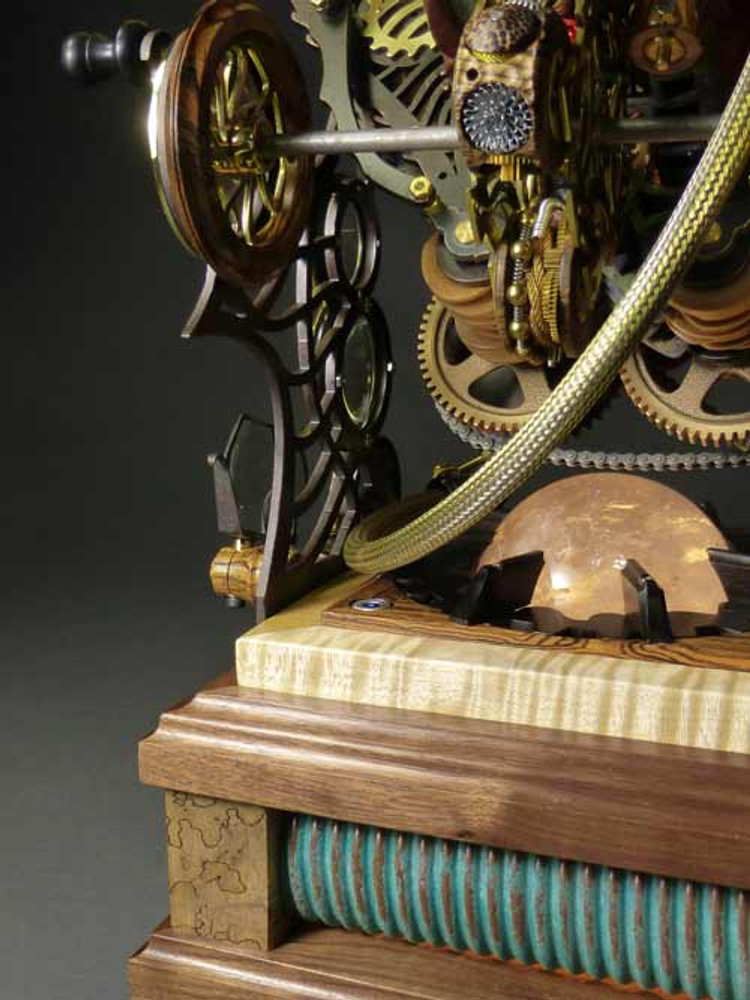 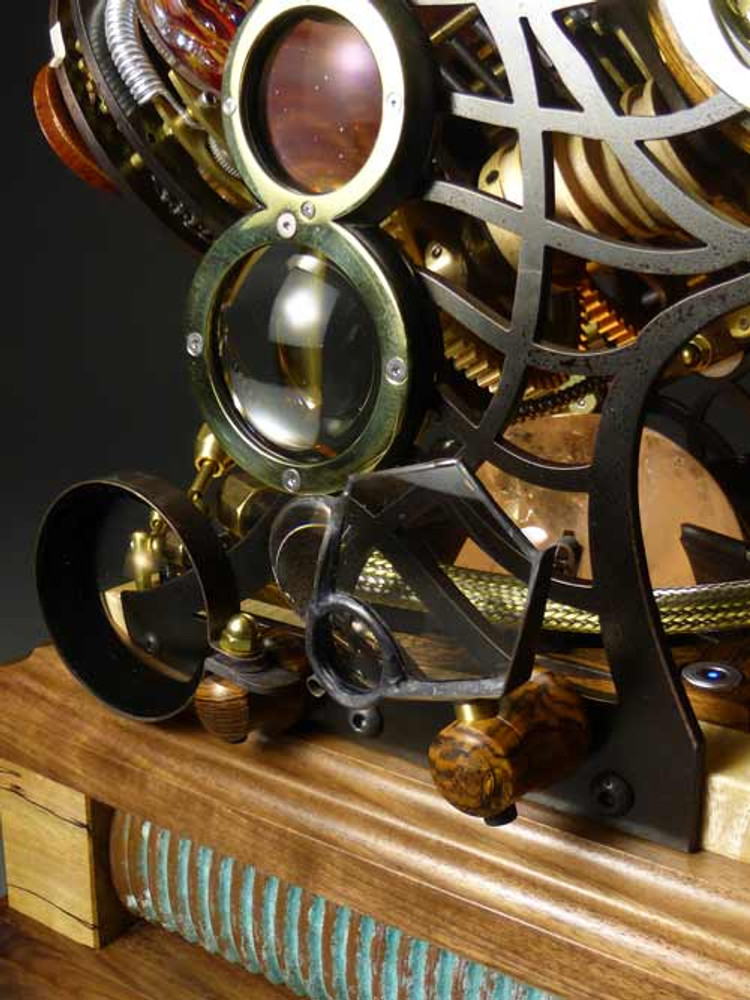 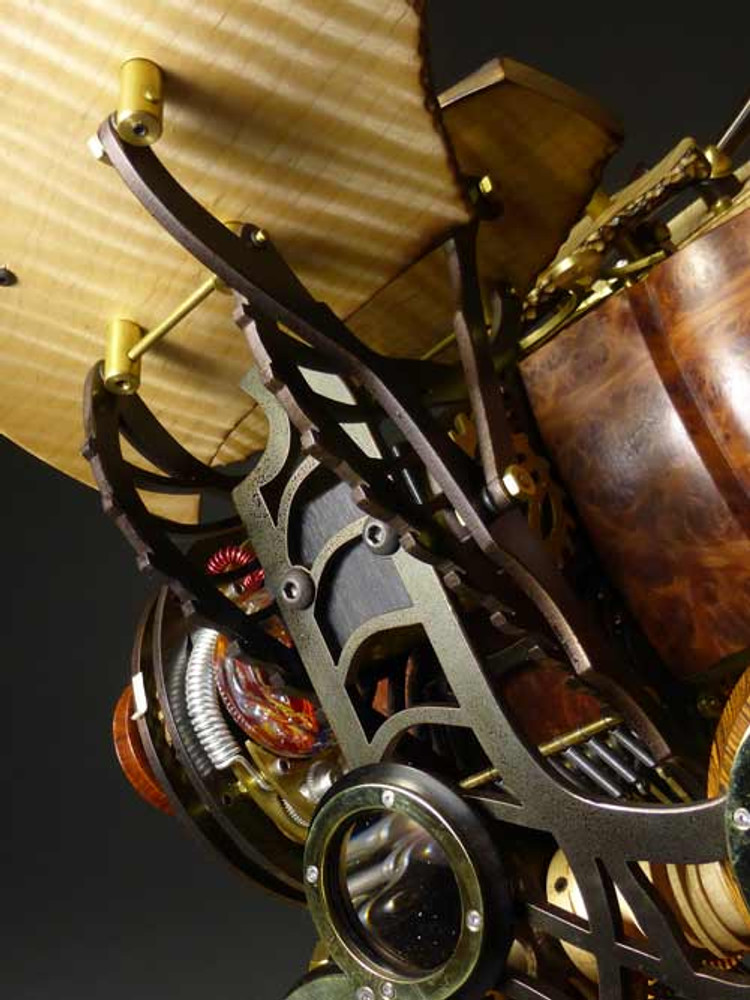 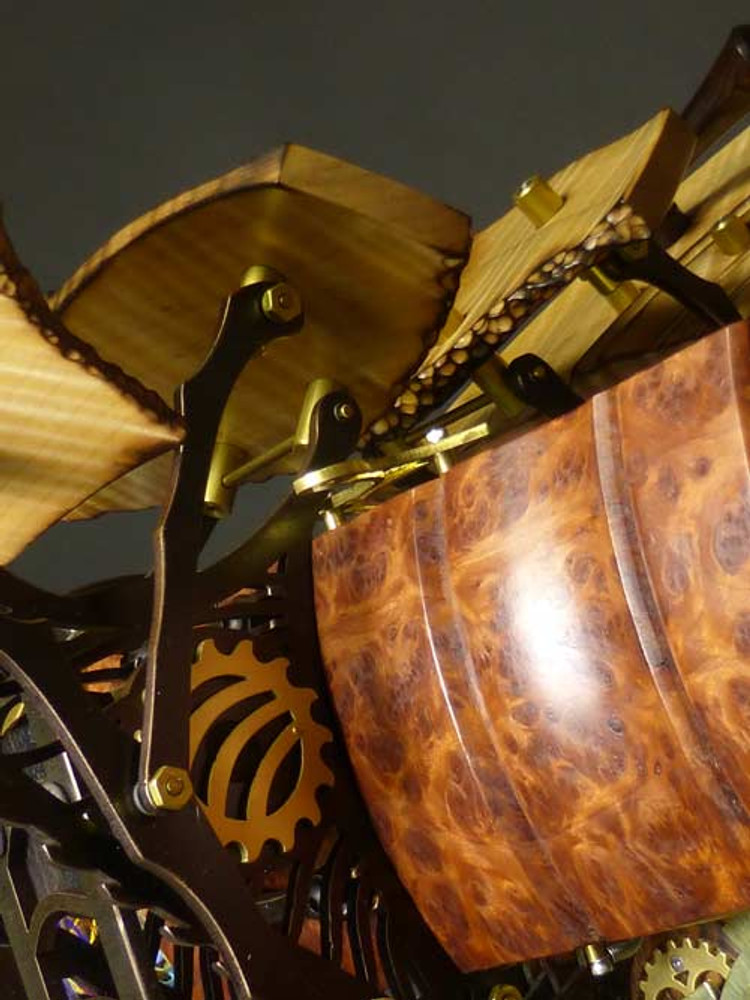 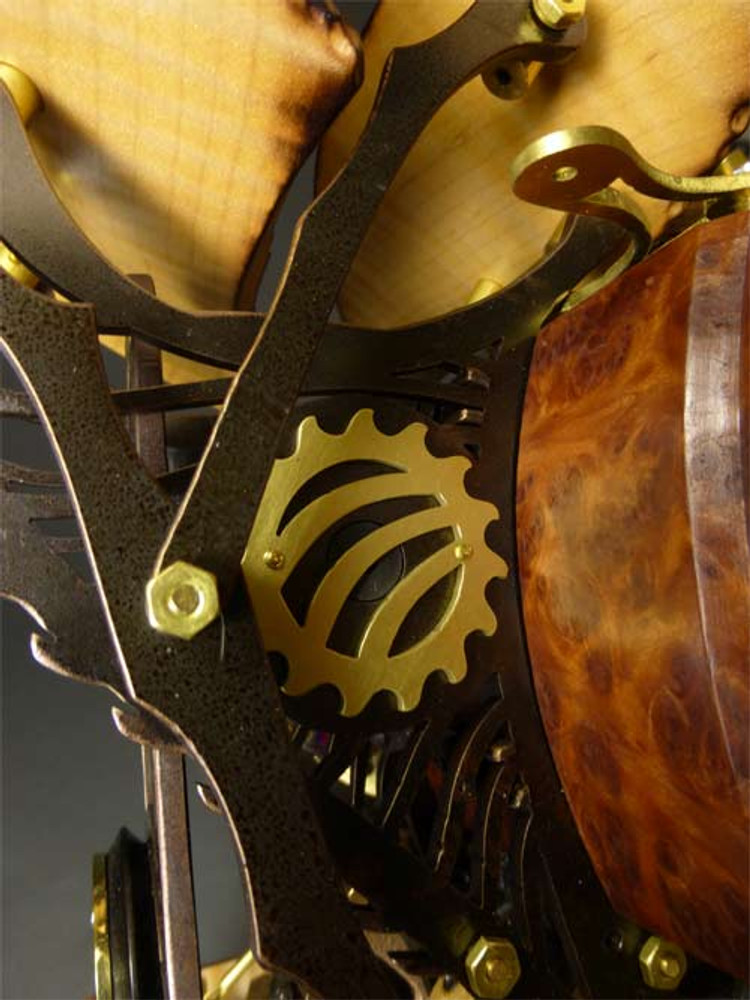 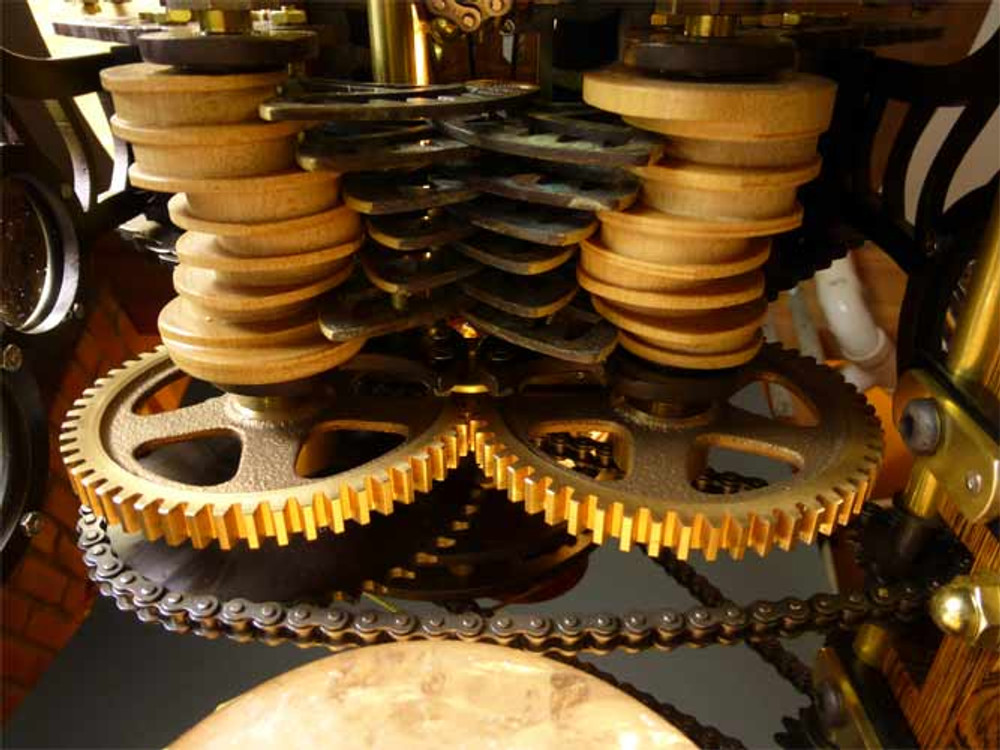 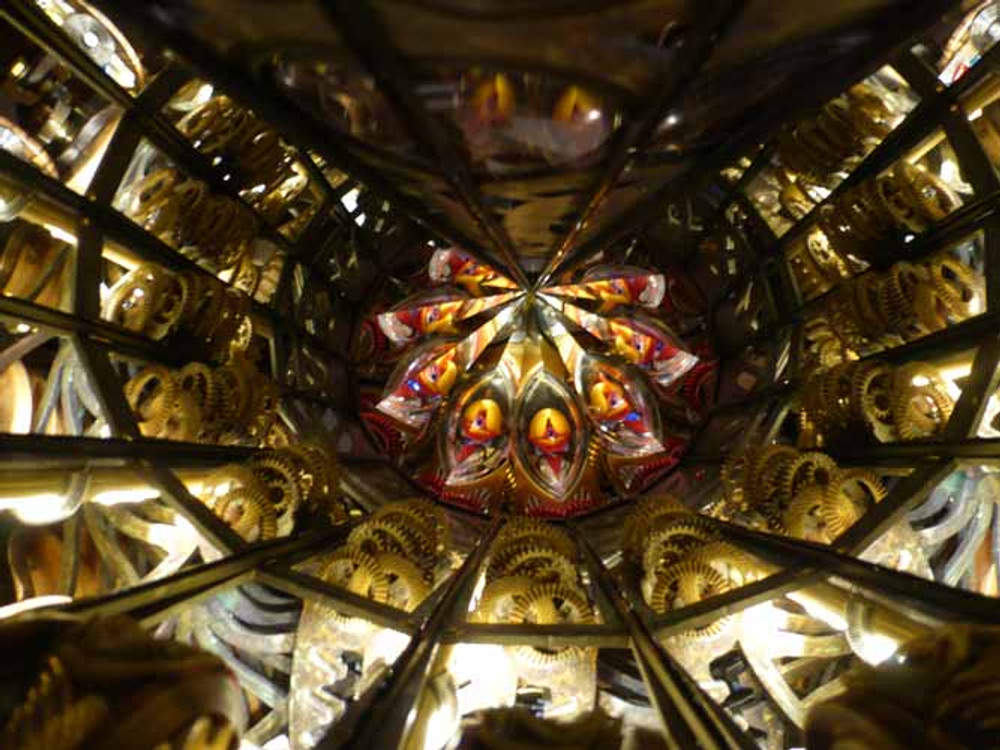 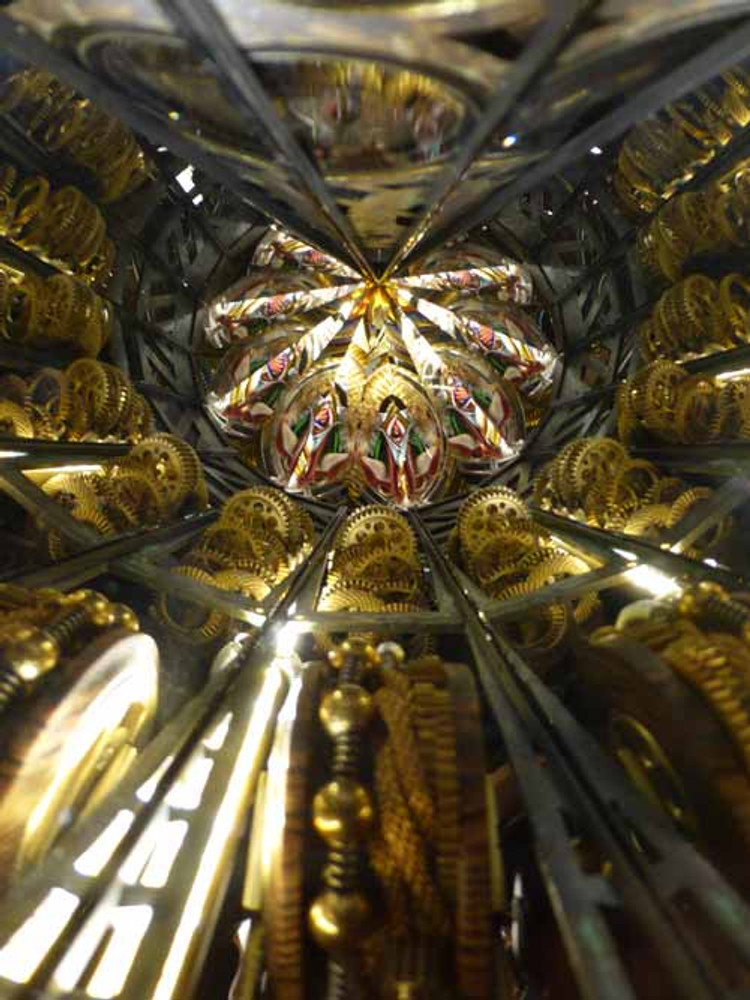 This is "Pegascoptylus" by Steven Gray.  Below is a description of this beautiful piece written by the artist.  Suffice it to say you really need to see this piece in person!  What a work of art!

The mechanics and objects for the scope started with a fairly simple converging two mirror system.  The use of this mirror configuraion provides many spaces for images as it has four different planes or windows interacting with the mirror system.  One of the planes is where the viewer looks into the scope to see the image.  The window opposite the eyes has three acrylic image cells that rotate with the main front wheel.  The image created by these cells are filled with lampworked glass suspended in liquid.  A window on the lower side of the mirror system interacts with cams and another four freely turning wheels on a larger wheel, each one of these four wheels has an assortment of magnest in their hubs.  These magnets respond to another small wheel close to the image opening the small wheels turn into.  The top panel is brass with a filigree pattern cut into it.  Then to help view the image, there is a set of four lens groups including lenses with mild magnification to exteme magnifiaction and a couple of reducing lenses.

There are two lighting systems including two switches.  One will illuminate the quartz crystal ball on the base, mood lighting, and it also turns on a set of lights illuminating the items on the inside of the mirrors.  The second switch will illuminate the rotating object cells and it also lights up the quartz ball.  All lights are LEDs and are dimmable. Exterior lighting can also be used to light up the image or enhance the LED lighting.  A set of lights on the lower window can also be rotated to feather the light to give the inside illumination different effects.

There are two axles with cranks on both axles.  One has a left or right crank handle and the other crank handle faces the viewer. The crank facing the viewer runs most of the mechanisms.  With a turn of this crank, two sets of chains and sprockets are set in motion, one going to the image had the other one going to a series of gears that provides the right and left symmetery of the wings and cams.  The image cell driven by chain and sprocket has three lampworked glass and liquid-filled acryic cells turning counter to the motion of the image head.  The acrylic cells holding custom lampworked glass are on an axle with pulleys moving past a stationary cable so as a head turns one direction the cells will turn in a counter rotational direction.  There is also a fun little geared unit powered by one of the axles.

The other chain drive sprocket is connected to an axle with a gear that synchronizes another gear and axle providing the left right symmetery to the wings and a set of cams.  The large and small wings are set up with sets of leavers creating a motion slightly out of syncronization with each other.  The out of sync actions creates a very interesting fluid feel to the motion.  A set of six cams on a couple of axles with leavers following the cams set up an intersteing motion in and out of the kaleidosocpe image. The leavers have various gears and textures attached to them and as the crank is turned and the cams activated, the gears up and down inside the images space.  The cams are fun to observe both outside and inside of the scope.

The axle that runs perpendicualar and below the kaleidoscope has small freely rotating wheels held inside of a larger wheel.  The small wheels have magnets on the hubs and interact with another wheeled magnet that is close to the image port.  The speed of rotation and depending on how often the action is reversed will create a semmingly random or chatoic pattern as each one of the four wheels passes into the image space inside the kaleidoscope.